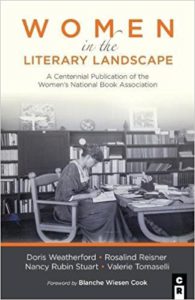 We are celebrating the newly released Women in the Literary Landscape produced by WNBA members. The book is now available on amazon.com

Mothers, sisters, daughters, and historical figures alike who fought, often into obscurity, for justice and equality. Women have risked their lives to secure the rights of children, workers, for our nation and fellow women.

Thanks to the work of progressive female writers, women earned some of the fundamental rights given to men and many began taking note of their talent instead of their gender.

Female writers have given us some of the greatest novels, short stories, poems, films and essays ever written. In centuries past, Female writers struggled to get their work noticed, so a few resorted to various forms of concealment. Some used male pen names, initials or remained anonymous so that their work wouldn’t be discounted because they were women.