WNBA-LA is excited to announce a series of weekly webinars during the month of May, and first up is “Write That Memoir” (Wednesday 5/6 @ 1pm). Wonderful authors Huda Al-Marashi and Ayser Salman will be hosting the virtual event and sharing tips for writing a memoir including how to collect memories to get started, being authentic, finding your theme, writing about family and why memoirs are important. 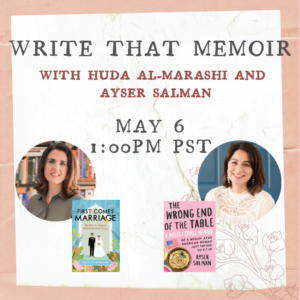 The webinar is free for WNBA-Members and $10.00 for non-members (TIP: Become a member and join us for all the May webinars for no additional charge!).  To sign up for the event, please RSVP and purchase tickets through the Facebook event.

Huda Al-Marashi is the author of First Comes Marriage: My Not-So-Typical American Love Story, a memoir the Washington Post called “a charming, funny, heartbreaking memoir of faith, family, and the journey to love.” Her other writing has also appeared in the Washington Post, the LA Times, al Jazeera, the Rumpus, and elsewhere. First Comes Marriage was long listed for the Chautauqua Prize and a finalist for the Southern California Independent Booksellers’ Award.

Ayser Salman was born in Iraq back before it became a curiosity and moved to the United States when she was a toddler. Her family moved around a lot those first few years, including spending five years abroad in Saudi Arabia when she was 10. This nomadic childhood made her constantly feel like a fish out of water, but it also shaped her interest in storytelling – the desire to learn about other people and what made them tick, as well as sharing her own experiences. She is a writer and producer/editor for companies like Universal Pictures, Miramax Films, Disney, FX and Lantern Entertainment. Ayser lives in Los Angeles, California.